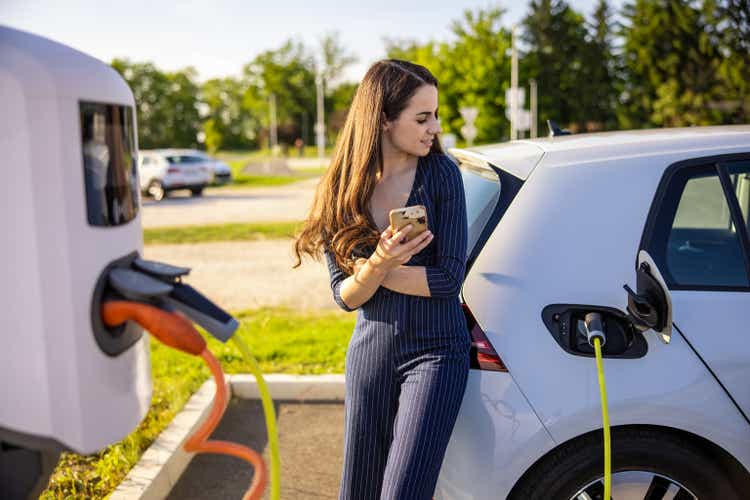 The Biden administration has set an ambitious target which aims for 50% of all new vehicles sold to be electric by 2030. In other parts of the world, similar targets have been set. For example, in the U.K. the sale of new petrol (gasoline) and diesel vehicles will be banned by 2030. This is huge as it effectively means all automotive manufacturers must convert to electric. However, the issue with this is many of these companies don’t have the skills, and electrical components necessary to accomplish this humongous task. This is where Dana Incorporated (NYSE:DAN) offers its solution. The company provides state-of-the-art electric propulsion systems and powertrains for vehicles. In the third quarter of 2022, the company reported strong financials beating both revenue and adjusted earnings estimates. In this post, I’m going to break down its business model, financials, and valuation, let’s dive in.

Dana incorporated offers three main product segments, Integration, systems, and components. The company supplies; e-gearboxes, e-axles, e-hub drives, inverters, and much more. The unique thing about Dana is it has moved from a simple component supplier to a full EV design partner with its customers.

The company has a prestigious customer list of major automotive manufacturers which include; Ford (F), Mercedes (Daimler), Volkswagen (OTCPK:VWAGY), Jeep, GM (GM), and many more (Hummer EV). Dana also specializes in the electrification of trucks with customers such as Hyllion and even agricultural/construction vehicles with John, Deere (DE), JCB, and Caterpillar (CAT). Dana Incorporated also has over 10,000 patents, which helps to protect its technology from the competition.

The electric vehicle industry was valued at $170 billion in 2021 and is forecasted to grow at a rapid 23.1% compounded annual growth rate up until 2030, reaching a value of $1.1 trillion by the end of the period. Dana is forecasted to benefit from the secular growth in this industry.

Dana Incorporated reported strong financials for the third quarter of 2022. Revenue was $2.54 billion, which increased by 15% year over year and beat analyst estimates by $37.17 million. This growth was driven by strong demand across the board, which was helped by commodity costs such as steel which has resulted in lower input costs and a $134 million recovery. This was offset by $139 million in foreign exchange headwinds, which was caused by a strong dollar versus many other currencies such as the Euro.

Breaking sales down by business unit, its largest segment, the light vehicle drive systems contributed to 39% of revenue and increased by 14% year over year. This was again impacted by $29 million in FX headwinds, but helped by $47 million related to falling steel prices. The company reported that dealer and equipment inventories were low, while demand is still strong. Dana Incorporated has a strong order book going into 2023, according to the company which is a strong positive. Dana supplies the electric driveshaft for the new electric Jeep Wrangler and Gladiator by Stellantis. According to one report, the Wrangler was the best-selling plug-in hybrid in Q3,22 with over 13,000 unit sales. The electric axle supplied is called AdvanTEK and uses state-of-the-art technology by Dana, to increase efficiency and performance. This same axle series is also used in the popular Ford Super Duty pickup truck series. For context, the Ford F-150 pickup truck is the most popular vehicle sold in the U.S. Ford is hoping the replicate the success with its new electric F-150, poised for release in Q1,23.

Its second largest segment, Commercial Vehicles also reported strong sales with $505 million reported, up a rapid 27.5% year over year. Dana helps with the electrification of large trucks and haulers such as those by Netherlands-based DAF. For example, in 2021 DAF launched its LF electric, a 19-tonne vehicle for urban applications. This entire vehicle was developed in “close cooperation” with Dana incorporated.

Its off-highway vehicles systems segment reported $694 million in revenue, which increased by 10.68% year over year. The off-highway segment is an interesting market as in the vehicle industry, there are leaders and laggards for EV demand. Consumer vehicles were a leader, followed by last mile delivery vehicles etc. Off-highway is expected to see its peak demand later, but Dana’s strategy is to be ahead of the curve and ready to meet demand. I expect the demand will be driven not just by emission targets, but more by the branding credentials and kudos offered for providing an EV off-highway vehicle.

Dana has also reported solid growth in its Power Technologies segment which increased revenue by 9.8% year over year to $298 million.

The company reported earnings per share [EPS] of negative $0.61, which actually missed analyst estimates by negative $0.75, due to the aforementioned reasons. In addition, the company experienced $20 million extra in net interest due to the timing of interest payments. Taxes were also $20 million higher due to the geographic earnings mix and payment timing.

A positive is on an adjusted or “normalized” basis earnings per share [EPS] was $0.24, which beat analyst estimates by $0.02. Free Cash Flow was $77 million, which was up $247 million over the negative $170 million reported in the prior year. This was driven by working capital and inventory optimization with its suppliers and customers.

Dana Incorporated has $384 million in cash and short-term investments on its balance sheet which is solid. The company does have fairly high total debt of $2.8 billion, but the majority of this ($2.3 billion) is long-term debt.

To value Dana, I have plugged its latest financials into my discounted cash flow valuation model. I have forecast 10% revenue growth for next year, which is conservative as it’s less than the prior 15% growth rate. I expect the lower growth to be driven by the tepid macroeconomic environment. However, in years 2 to 5, I have forecasted a recovery with 15% revenue growth per year, as the electrification industry continues to grow.

I have also forecasted an increase in the pre-tax operating margin to 6% over the next 8 years. I expect this to be driven by improving supply chains, and a correction in both inflation and external macroeconomic factors which are driving higher costs.

Given these factors, I get a fair value of $32.91 per share, the stock is trading at $15 per share at the time of writing and thus is ~54% undervalued or “deeply undervalued”.

The high inflation and rising interest rate environment is forecasted to cause a recession in 2023. We are already seeing signs of lower EV demand, which is likely as a result of this. For example, Tesla (TSLA) has recently announced a $7,500 discount per car and reduced production at its Shanghai factory when it reopens in January.

Dana Incorporated is poised to supply traditional automakers with the electric vehicle parts needed to transform their operations. The company has best-in-class technology and so far has been executing well. Its stock is undervalued intrinsically and relative to historic multiples and thus it could be a great long term investment.